Artificial Enamel – Stronger and Durable finds other uses beyond Medicine

Researchers have successfully designed artificial Enamel in their lab, which might not be used in repairing or replacing lost Enamel on natural teeth but can be used in other areas beyond medicine. Artificial Enamel can be used in creating Body armor, stronger body for Vehicles, hardening surfaces of many appliances and even in building materials which can help in protecting against Earthquakes as well.

The Artificial or Lab grown Enamel has been found to out perform the natural enamel in six different areas such as Elasticity, absorbing vibrations, strength etc.

Enamel is a Complex structure and to replicate it and mimic all its properties is a big step in the right direction. Natural Enamel is the hardest tissue in the human body which is strong enough to not crack on applying hard forces for lifetime and also elastic enough to bear all types of forces. Natural Enamel has many nested modes of organization like wool fibers spun into yarn and then knitted in to a cable knit sweater, Calcium, phosphorus and oxygen atoms must come together in a complex repeating pattern to form crystalline wires.

To achieve artificial enamel structure, researchers used extreme temperature to arrange the wires in an orderly formation to achieve the required arrangement. Earlier scientists unsuccessfully used peptides – short chains of amino acids which help in building proteins to mimic enamel. With the new attempt Researchers used malleable metal based coating to encase the wires to give extra strength 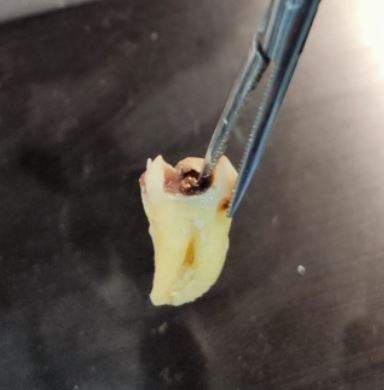 According to Nicholas Kotov, a chemical engineer at the University of Michigan, Ann Arbor, said – What makes the artificial Enamel more like Natural Enamel is the coating on the crystalline wires which makes the Artificial Enamel more resilient and less likely to break, the soft material covering the wires can absorb high amount of pressures and shock.

The magnesium rich coating of the Natural Enamel has been replaced with Zirconium Oxide giving it more strength and also non toxic. The use of these materials helped in achieving a material which was hard and could be cut into desired shapes using a diamond based saw.

The team of Researchers have tested the hardness and elasticity of the new Artificial Enamel material by making a small notch on the surface and applied pressure on it until it gave in and formed a fracture. The toughness of the material was determined by seeing the pressure applied and the length of the crack, it also helped in determining the strain resistance of the enamel. The researchers even tried Artificial Enamel against Natural Enamel where the results where in favor of lab grown enamel outperforming the Natural one.

The cells (Ameloblasts) which form Enamel die as soon as the tooth emerges from the gums hence Enamel cannot repair itself. Most dental visits are due to Caries in the Enamel and n neglecting, it might lead to tooth loss as well. To replace damaged Enamel, Dentists use artificial filling materials such as GIC, Composite, Dental Amalgam, etc which do not have the same properties such as Natural Enamel to withstand the Oral forces for decades.

Tim Spector: The Latest Science on Gut Health (and How To Find The Right Diet For You)