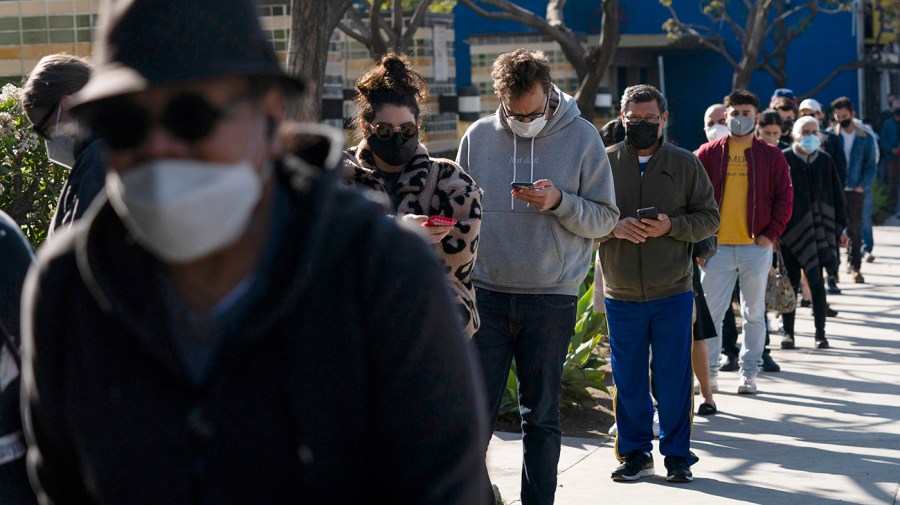 Concerns are rising over a new omicron subvariant that is even more highly transmissible, called BA.5.  The new subvariant has risen to be a majority of COVID-19 cases in the United States and is sparking concern about an increase in hospitalizations.

The White House held a press briefing with its top health experts on Tuesday to address the rise of the subvariant and urged people to get booster shots if they have not yet.

BA.5 causes concern because of its increased contagiousness and because of its greater ability to evade the protection from vaccines and prior infection.

Importantly, though, the vaccines still provide crucial protection against severe disease and death, especially for people who have received their booster shots.

“There are concerning things about BA.5, but it doesn’t represent an entirely new threat that’s going to upend all of our protections,” said Josh Michaud, associate director for global health policy at the Kaiser Family Foundation.

The White House did not announce any major shift in strategy on Tuesday, instead pointing to continued use of booster shots and treatments like Pfizer’s Paxlovid antiviral pills as being effective even against the new subvariant.

“It’s something that, A, we don’t panic on, B, we don’t let it disrupt our lives, but we take it seriously enough and utilize the tools that we have to mitigate,” Anthony Fauci, the government’s top infectious diseases expert, said Tuesday.

Still, some experts are calling for greater action from the administration, particularly around getting people boosted.

Eric Topol, a professor of molecular medicine at Scripps Research, wrote on Twitter that the Centers for Disease Control and Prevention (CDC) should finally change the definition of “fully vaccinated” to include more than just the original two doses to highlight the need for booster shots.

“What country has a lower booster rate than Iran, Rwanda, Sri Lanka, Azerbaijan, Tajikistan and 61 others?” he wrote. “The United States.”

Only about half of U.S. adults who received their first two shots have received a booster shot, according to CDC figures.

Uptake for a second booster shot, which is recommended for people 50 and older, is even lower.

Biden administration health officials on Tuesday urged people to get their booster shots now to help fend off BA.5. Because protection decreases over time, they said it is especially important to get a shot if someone’s most recent dose was in 2021, not 2022. They are also discussing opening up second booster shots to people under 50.

Hospitalizations are already increasing amid the rise of BA.5, to around 37,000, according to a New York Times tracker, though are still relatively low compared to other points in the pandemic. Deaths and intensive care unit stays have stayed largely flat so far despite high levels of cases, which experts attribute to the protection of vaccines and treatments.

Richard Besser, a former acting director of the CDC, said the “sheer volume of people being infected” would likely lead to a rise in hospitalizations but that he didn’t think it would be “anywhere near the numbers we saw with the previous omicron surges.”

But Besser, now the CEO of the Robert Wood Johnson Foundation, noted that while protection against severe disease is holding up in an important way for boosted people, “a lot of people are going to be experiencing COVID on the milder side,” given the new subvariant’s ability to reinfect even people who already had a previous version of omicron.

Particularly for people who are at higher risk, Besser said BA.5 is “something you should pay attention to and consider taking precautions like wearing masks indoors when you’re around people.”

With much of the country going on with their normal lives, the Biden administration has not signaled a return to emphasizing restrictions like mask mandates, though health officials on Tuesday did mention that masks offer protection.

“Each individual is making these decisions rather than political leaders,” said Michaud, of the Kaiser Family Foundation, speaking of the new COVID-19 era. “It’s kind of up to you, for better or for worse, to decide if you want to wear a mask, if you want to avoid social gatherings.”

Leana Wen, a public health professor at George Washington University, said steps like that should be reserved for people at particularly high risk who are worried about getting infected at all.

“If you are vaccinated and boosted, the vaccines are still doing their job, which is to prevent you from becoming severely ill,” she said.

Pfizer and Moderna are working on updated vaccines that will better target BA.5, but those are not expected to be available until the fall at the earliest.

In the meantime, health officials say people should not wait for the updated shot and should get their booster now, which will not prevent getting the newer vaccine once it is available.

“The reason to get a booster now is to prevent infection now,” CDC Director Rochelle Walensky said. “There’s a lot of infection now, an increasing number of hospitalizations now.”

How to Choose a Nursing Specialty