As a microscopic virus brought the world to its knees in 2020, a long-simmering mental health crisis erupted. Skyrocketing rates of depression and anxiety exposed a glaring void: The current suite of depression treatments don’t fit many patients.


A group of biotech stocks including Biogen (BIIB) and Sage Therapeutics (SAGE) hope to change that as soon as this year.

Psychiatrists have noted the shortfall before, but the coronavirus pandemic put it front and center. By some accounts, rates of depression and anxiety climbed at least threefold as the world struggled to contain personal and societal risks. Some experts see the pandemic as a “triggering event” that ballooned the number of depression patients into the tens of millions. Meanwhile, too few doctors could take on the sudden influx of patients.

The seismic shift opened the window for biotech stocks that began testing new approaches to depression years ago. This group of mostly small companies includes behemoth Biogen, teamed up with Sage Therapeutics, on what could be the fastest-acting depression drug to hit the market. The effort has yet to boost Biogen stock or Sage stock, but the two hope to win approval for the drug this year.

Lesser-known names are pursuing other approaches that could shake the decadeslong hold on the market by traditional depression treatments like Prozac and Zoloft. One company, Axsome Therapeutics (AXSM), already has submitted a new type of depression drug to regulators and could win approval any day.

“While depression and brain health issues were a problem prior to the Covid pandemic, Covid has certainly exacerbated the issue and has created a three(fold) to fourfold increase in the amount of depression in the world,” Sage Chief Executive Barry Greene told Investor’s Business Daily. “We really are in a brain health pandemic.”

Biotech Stocks: Why Depression Is Tricky

Treating depression is tricky because the brain remains largely a mystery to researchers. A cookie-cutter approach to depression treatment doesn’t work. 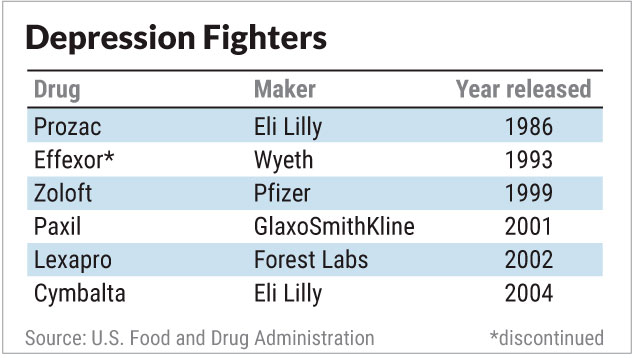 The best parallel is dementia, she says. The cause could be Alzheimer’s disease. Or, it could be vascular or Lewy body dementia, which affects thinking and reasoning.

The dementia could also be a drug-induced condition. The symptoms are the same. But one treatment for all? It doesn’t exist.

That’s why patients often cycle through depression treatments. Common treatments include Prozac and Cymbalta, which influence a neurotransmitter in the brain called serotonin.

But these drugs carry a list of possible side effects including weight gain and, in men, sexual dysfunction. Benefits may not come for a month or longer, if at all.

“You’re talking about the most complicated structure in the known universe,” said Dr. Michael McGee, president of WellMind, a website that connects patients with therapists. “I think we don’t really understand how these medications work. It’s extremely complicated.”

Biotech stocks hope to make a difference. The company that gets it right could benefit with a piece of what Wedbush’s Chico sees as a $16 billion to $18 billion opportunity over the next five years. Research firm Emergen Research says the depression treatment market could hit $16.1 billion by 2027.

New depression drugs will have to differentiate themselves from the 40-year-old treatments on the market.

“No one wants to make the 15th SSRI (selective serotonin reuptake inhibitor) or the 20th SNRI (serotonin-noradrenaline reuptake inhibitor),” Chico said. Prozac, Zoloft, Paxil and Lexapro belong to the SSRI class of antidepressants. Cymbalta and Effexor are SNRIs.

Sage sells a postpartum depression treatment — the only one on the market — called Zulresso. But Zulresso hasn’t been a huge commercial success. Patients receive Zulresso as a 60-hour infusion in the hospital. The drug is so sedating that patients can lose consciousness.

The infusion time “is a big ask” for new mothers, Wedbush’s Chico says.

In testing, Zulresso repeatedly outperformed a placebo in alleviating symptoms of depression. But in the first quarter, it brought in just $1.6 million in sales, matching the year-earlier period.

Greene thinks Sage can do better. Now, with Biogen at its side, the company is working on a new depression treatment called zuranolone. The companies plan to ask the Food and Drug Administration to approve zuranolone for both major depressive disorder and postpartum depression later this year. The effect on Sage stock and Biogen stock remains to be seen.

Like Zulresso, zuranolone works by modulating a neurotransmitter called gamma-aminobutyric acid, or GABA. Biotech stock Sage has yo-yoed on hopes for its depression treatment.

For biotech stock investors, the hope for zuranolone lies in its quick onset and seemingly long impact.

Patients take zuranolone for two weeks and could potentially feel its impact for a year or longer. That theory played out in testing. Depending on the dosage, 70%-80% of patients in one study only needed a single two-week course of zuranolone to feel better for a year.

Like the psychiatrist, Dr. McGee, Biogen’s Kate Dawson says it’s not totally clear how zuranolone works. Dawson is a neurologist by training and heads up Biogen’s therapeutics development unit.

“In depression, you see some changes in the circuitry — which circuits in the brain are active, which ones are less active,” she told IBD. “What we see with taking this drug is a change back to more normal circuit activity. So, the thinking is somehow it modulates or allows the brain circuits that are affected in depression to return to more normal function.”

Sage Therapeutics CEO Greene says a “triggering event” likely causes the brain’s circuitry to go haywire along the GABA pathway. Zuranolone works to rewire the brain, he says. For many people, the triggering event could be losing a loved one or a job. But many experts feel that for millions of people since 2020, the societal struggles of a pandemic are to blame.

He estimates 21 million people in the U.S. have depression. Of those, he sees roughly a third as newly diagnosed or getting treatment.

Those numbers leave a big window for other biotech stocks working on new depression treatments.

Zuranolone appears to work in a wide array of people, from an 18-year-old woman to a 60-year-old man in all races, weights and demographics, Greene says.

But zuranolone could be expensive, says SVB Securities analyst Marc Goodman. He noted drug companies typically price depression treatments for chronic use. Patients take Prozac once a day, for example. It costs $556 for a 30-day supply, according to Drugs.com. That’s about $18.53 per pill, or $6,765 for a year’s supply.

If zuranolone uses a similar pricing model, that means each pill in a 14-day supply would be worth a hair above $483.

Greene declined to discuss pricing, other than to say the companies will “price in a way that recognizes the need for budget and health care affordability.”

Other Antidepressant Approaches From Biotech Stocks

Analyst Goodman is also keeping his eye on biotech stocks Axsome Therapeutics and Relmada Therapeutics (RLMD). Both hope to interact with the N-methyl-D-aspartate neurotransmitter, commonly known as NMDA.

Many see dysregulation of NMDA playing a role in depression, Relmada Chief Medical Officer Marco Pappagallo told IBD by email. The first generation of these products include ketamine. Today, the only FDA approved form of ketamine is Johnson & Johnson‘s (JNJ) Spravato.

A health care professional must watch a Spravato patient for two hours due to the potential for disassociation. Relmada hopes to replicate the rapid impact “while avoiding the psychosis-like, dissociative and hallucinogenic effects typical of the more potent first-generation NMDA receptor antagonists,” he said.

Axsome is working on another NMDA-targeting drug. Its depression treatment is a unique formulation of Wellbutrin and a cough suppressant. In one study, the twice-daily pill eased depression symptoms for over a year. The company has already submitted its results to the FDA.

“It could be approved as early as tomorrow,” said Goodman, the SVB Securities analyst. He has a pair of outperform ratings on the biotech stocks.

Biotechs like Biogen stock and Sage stock were working on depression treatments before the Covid pandemic. But the pandemic highlighted — and exacerbated — the need.

“You’re reading a lot about mental illness because of Covid,” Goodman said. “It’s factually true. People are more affected by Covid mentally. But all of this new stuff has nothing to do with Covid. Covid just happens to be an event that occurred that has increased the interest.”

Though there haven’t been any new approaches to depression treatment in decades, what has changed is the attitude around mental health, Sage CEO Greene said. The pandemic helped people get there.

“People are talking more,” he said. “The stigma is being raised. The openness to confront depression is increasing, whether it’s postpartum depression or major depressive disorder.”

Greene went on to say: “People are talking about it. Services are being set up. Telehealth was greatly expanded during the pandemic. So, the stigma around even talking about it is starting to raise.”

Make Or Break For These Biotech Stocks?

Though there’s promise for their depression treatments, the biggest biotech stocks are under pressure.

The decline for Biogen stock began in June 2021 after its controversial Alzheimer’s treatment gained an accelerated FDA approval. Since then, the Centers for Medicare and Medicaid Services decided against covering that drug for most patients. Biogen has now de-emphasized its commercial efforts.

Shares have only inched higher since mid-May, alongside a broader climb for biotech stocks. But Biogen stock is still facing a ceiling at its 200-day moving average, according to MarketSmith.com.

Sage stock has posted an even deeper fallout. Shares began moving lower in January 2021 though, like Biogen, began gaining slow speed this May. Now, Sage stock is forming a cup base with an entry at 45.84.

Relmada stock, on the other hand, recently broke out of a deep cup with handle with a buy point at 26.29. The biotech stock has a strong Relative Strength Rating of 97 out of a best-possible 99, according to IBD Digital. This puts its performance among the top 3% of all stocks in terms of 12-month performance.

Axsome retook both its key moving average in late June after the company said, in a Securities and Exchange Commission filing, that it had settled labeling negotiations for its depression treatment with the FDA. The biotech stock has a strong RS Rating of 98.

Get Full Access To IBD Stock Lists And Ratings

IBD Stock Of The Day: See How To Find, Track And Buy The Best Stocks

Lipid levels in midlife and risk of atrial fibrillation over 3 decades—Experience from the Swedish AMORIS cohort: A cohort study