Met With Too Many Late-Stage Diagnoses, Doctors Create Novel Test to Earlier Detect Cancer in Your Saliva 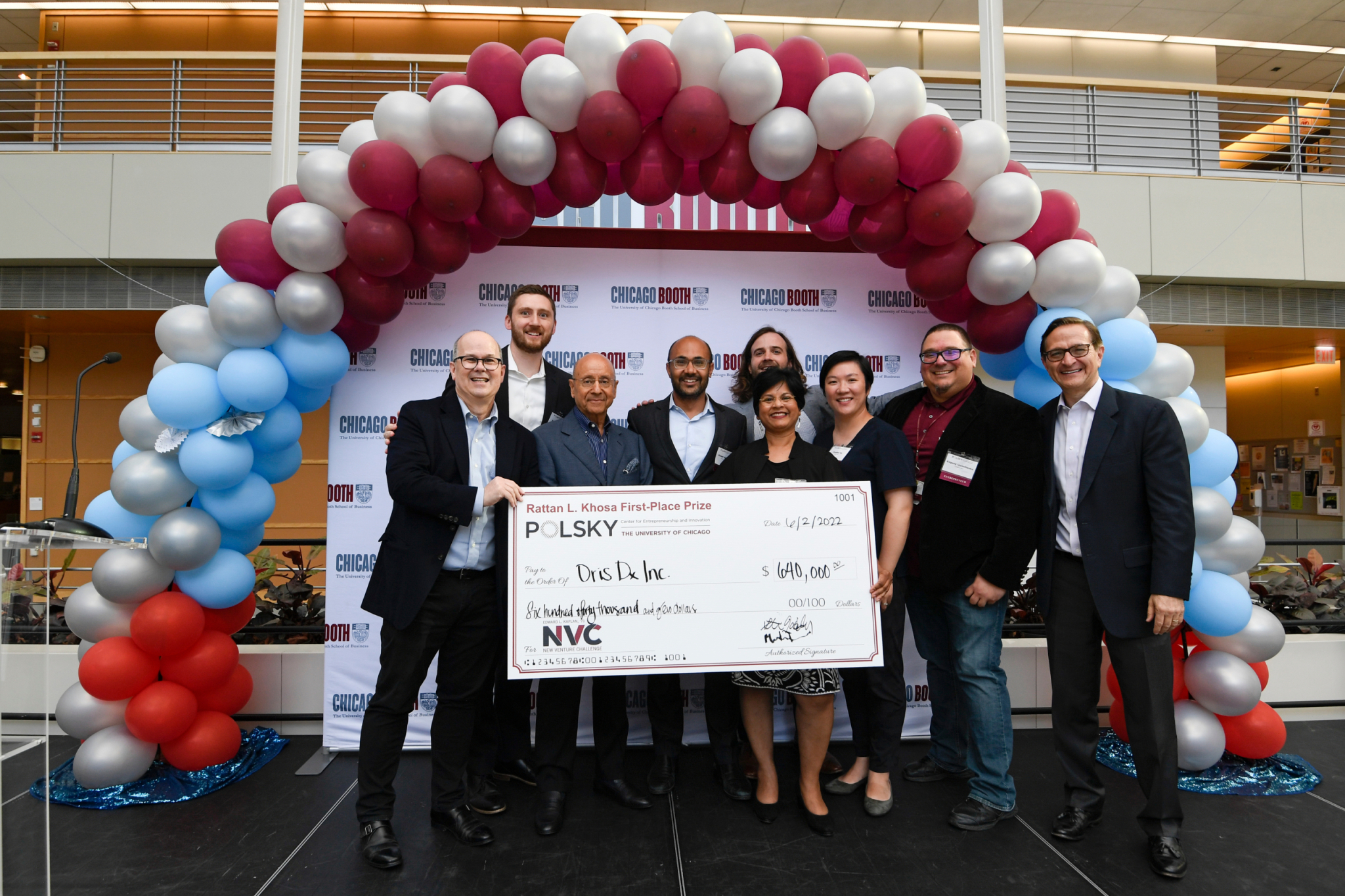 The Chicago-based startup was formed based on a decade of research in the field of liquid biopsy and cancer genomics at the University of Chicago and Johns Hopkins University by top physicians and scientists, including cofounders Nishant Agrawal, Chetan Bettegowda, Rifat Hasina, and Evgeny Izumchenko.

Currently, no oral cancer salivary diagnostics are endorsed by the American Dental Association. The standard for detecting head and neck cancer is a biopsy, which often occurs at late stages, and is associated with poorer patient outcomes.

Using biomarker-based molecular genomic techniques to diagnose oral cavity cancers earlier, OrisDX’s technology is based on the latest science and has been proven in clinical studies. “This is going to be a game changer in the field for oral cancer,” said Agrawal, OrisDX CEO and section chief for otolaryngology and head and neck surgery at UChicago Medicine.

As a surgeon and as a clinician, Agrawal treats patients with oral cancer every day and sees advanced-stage oral cavity cancer all too often, with most of his patients presenting with Stage 3 or 4 cancers.

“It didn’t make sense why most of our patients presented to us with these advanced stages,” said Agrawal. His professional network includes other surgeons and head and neck oncologists who have helped confirm the team’s belief that its test will be valuable to providers and patients alike.

OrisDX’s first product is focused on detecting oral squamous cell carcinoma (OSCC), the most common head and neck cancer impacting more than 30,000 people in the US each year. The non-invasive test can detect cancer using next-generation sequencing.

Existing tests are based on indirect tools to detect OCSCC, either as light-based, brush tests, or singular biomarkers solutions. Those tools are not as reliable as the OrisDX test, which achieves “the highest sensitivity and specificity, and is the most consistent,” explained cofounder Jake Stangl, MBA ’22, chief business officer, who brings to the business more than eight years of experience in consulting for some of the largest global biopharmaceutical companies.

Izumchenko, OrisDX chief science officer and biomedical researcher at UChicago, added that the test can improve a patient’s outcome “on many different levels.” In addition to screening patients at high risk of developing cancer, the tool enables physicians to assess patient response to treatment in real-time and adjust the course as needed.

Additionally, head and neck cancers are known for high reoccurrence, especially during the first two years after treatment, so it is important to continue with regular testing, which the non-invasive test makes easier.

“It’s a huge help and fiscal benefit to detecting oral cancer early and not having to go through extended treatment that often involves surgery, chemotherapy, and radiation, which is not only expensive but doesn’t guarantee there isn’t a lost life,” said Hasina, chief operating officer at OrisDX, trained dentist, and researcher in the UChicago department of surgery.

Early diagnosis has proven to be the most effective way to reduce cancer-related deaths, explained Bettegowda, chief medical officer and neurosurgeon at Johns Hopkins. His research was seminal in creating liquid biopsy company Thrive, which was recently sold to Exact Sciences in a deal worth up to $2.5 billion. “We are hopeful that OrisDx will be able to make a difference by enabling earlier detection of head and neck cancers, an area of significant unmet medical need,” he said.

The OrisDX team was initially formed after Agrawal and his lab performed the culminating research in 2018-2019, though several on the team have a long history of collaboration, having previously worked together at Johns Hopkins University where they published more than 20 papers in the field.

“We found this equilibrium where we just fit well,” explained Izumchenko, speaking to the development of the team. “It was only natural for us to connect – this unique network of people who had been extremely successful.” All of the technologies the cofounders had developed “basically joined forces,” he added.

To advance this work, the team initially connected with the University of Chicago Booth School of Business as part of the Global Social Impact Practicum (GSIP), an experiential course that enables students to explore the impact of technology, social enterprise, and philanthropy on India’s most pressing challenges. Five MBA students traveled to India with Hasina, visiting labs and talking with doctors to determine whether or not there was a market need for the test, and if patients would be interested.

“At that point, what we found was that obviously there is a huge market need and interest, it would be beneficial, but the pain point was the price,” explained Hasina. As the project in India was wrapping up, COVID hit, halting any progress in the region – but the researchers didn’t sit still and decided to pursue commercialization stateside. “It’s actually better to start in the US,” she said, “because we know the system and the FDA and we have the resources and ability to get it reimbursed.”

Backed by the rigor of the FDA, OrisDX would have an easier time getting buy-in from the rest of the world, noted Hasina, for whom global accessibility of the test is a way to give back to her first home of Bangladesh, which has an oral cancer prevalence similar to India.

Still, the path to commercialization is challenging. “At first it was guarded excitement because we didn’t know how to do it,” noted Izumchenko, “The team consults companies often, but being an advisor is one thing – creating something from scratch that is yours is completely different.”

“It’s almost always that we conduct discovery and we do validation, but it’s the biotech companies that produce the tests,” added Hasina. “We knew that we had to do it; that we were the experts that know it. We couldn’t just hand it to somebody else.”

With a new plan in place, the next step was teaming up with a chief business officer, Stangl, who met the group through the Polsky Center’s Collaboratorium, which brings together Chicago Booth students with researchers and faculty who are exploring commercialization opportunities for their work.

“What enticed me first about OrisDX was their team, a group of really passionate individuals who care about one thing: getting patients the help need,” Stangl noted.

OrisDX went on to participate in the I-Corps program to determine customer market fit, and the Compass deep tech accelerator, which helped guide the researchers step by step, connecting them with the right people and providing a structured path to follow.

The startup’s Polsky programming participation culminated in a first place win and $665,000 in investment at the 26th Annual Edward L. Kaplan, ’71, New Venture Challenge (NVC), as well as a $200,000 co-investment via the George Shultz Innovation Fund.

“The well-resourced programs at the Polsky Center really enabled and facilitated all of this. Without Polsky, we wouldn’t be in this position,” said Agrawal, adding that they learned a lot from many different people with different experiences, and ultimately, were able to build something from what they learned.

“It was amazing the pace at which we went and the resources that were available to us. I became an entrepreneur overnight,” added Hasina.

Most recently, OrisDX was selected to participate in the inaugural cohort of SMILE Health, an accelerator from CareQuest Innovation Partners in partnership with MATTER focused on solutions that make oral health more accessible, equitable, and integrated with overall health.

This combined funding will help them build out the team while formalizing regulatory and reimbursement strategies and path to market. The goal is to launch the product in Chicago across three different patient segments of screening, diagnosis, and monitoring by the end of 2023.

“There’s a lot of potential for this product to really make an impact in the world,” said Agrawal. “With Polsky and Booth, there are no limits. Think big, work hard, and make it happen.”

Article by Melissa Fassbender, senior assistant director of external relations and science communications at the Polsky Center. Melissa is a former journalist and has held the role of editor at various global publications in the drug development, clinical trials, and design engineering space. Reach Melissa via email or on Twitter at @melfass.