Nurses need an immediate and substantial pay rise, warns the Royal College of Nursing (RCN), as it says a new poll shows a rise in public support for nurses taking industrial action.

Market research, carried out by YouGov for the RCN, showed that in May 42% of respondents said they were ‘very’ or ‘quite’ likely to support nurses taking industrial action over their pay.

This figure has risen sharply to almost half (49%), which the RCN believes is due to the prospect of another below-inflation pay rise, after the government recommended a 2-3% pay award in their submission to the NHS Pay Review Body in March.

The YouGov poll also showed four in five people (86%) in England support a pay rise for nursing, with nearly two-thirds (62%) favouring an increase of 5% or above.

The RCN has warned that nursing staff in England cannot continue to wait for the announcement, which is currently three months beyond the start of the 2022-23 financial year.

The union has renewed its demands and is calling for the pay award to be made before the House of Commons rises for its summer recess later this month. 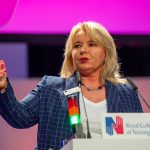 “The pressure on nursing staff is unrelenting and now soaring inflation means they’re struggling to pay the bills and going to food banks,” she said.

“Nursing staff are leaving the profession in their droves – the incredible financial hardship they face is proving the final straw. After a decade of pay cuts by the UK government, nursing staff can’t afford to wait anymore.

The YouGov poll found that nearly eight in 10 (79%) people think there are too few nurses currently working in the NHS in England and over half of the respondents (56%) said training more nurses should be a top priority for the NHS in England, when presented with a list of competing priorities.

Ms Cullen added: “Nursing is a highly-skilled profession and must be recognised as such – investing in the profession must start with fair pay.

“No nurse ever wants to take industrial action but nothing is off the table for our members,” she said. “Nursing staff may feel they have no other choice to protect patient safety.”

This poll comes shortly after the RCN in Scotland urged its members to reject the Scottish Government’s 5% pay offer in a recent ballot.

The ballot also consulted its members on whether they would be willing to take industrial action, short of and including strike action, if the majority of its members voted to reject the offer.

Julie Lamberth, chair of the RCN Scotland board, argued that the pay offer failed to match the expectations of an above-inflation pay award.

A government spokesperson said: “The government wants a fair pay deal for nurses and the taxpayer, and is carefully considering the recommendations from the independent pay review bodies.

“We are incredibly grateful to all NHS staff and they received a 3% pay rise last year – increasing nurses’ pay by £1,000 on average despite a public sector pay freeze – and we are giving NHS workers another pay rise this year.”

The UK government is expected to announce what pay rise NHS staff in England will be awarded for 2022-23 very soon.

The decision will have an impact on what funds are available for an NHS pay rise in other UK countries and an announcement by the Welsh Government is expected to follow.