With millions of Root Canal Treatments being performed every day across the globe, it is important to make sure that Root Canal Treatment is successful in clearing out the bacteria form the Root canals to achieve the purpose of saving an infected tooth using root canal treatment. Disinfection protocol being used today includes mechanical preparation along with use of chemicals such as Sodium Hypochlorite, Hydrogen Peroxide, Chlorhexidine, etc along with Lasers and Ultrasonic devices. If these chemicals fail to penetrate the dentinal tubules, accessory canals, etc, proper disinfection cannot be achieved. This is where Nanobots have come into action in eliminating Bacteria in Root Canals which is being termed as – “Nano Dentistry”

According to American association of endodontics over 25 millions of root canals are performed annually, over 90% are successful, remaining 10% failures are due to inadequate decontamination of root canal treatment.

The dentinal tubules are very small, and the bacteria reside deep in the tissue. correct techniques are not efficient enough to go all the way inside and kill the bacteria. To address these treatment failures, researchers from the “Indian institute of science and nano robotics” company “Theranautilus”  have demonstrated that nano sized robots (nanobots) can effectively kill bacteria in the dentinal tubules. 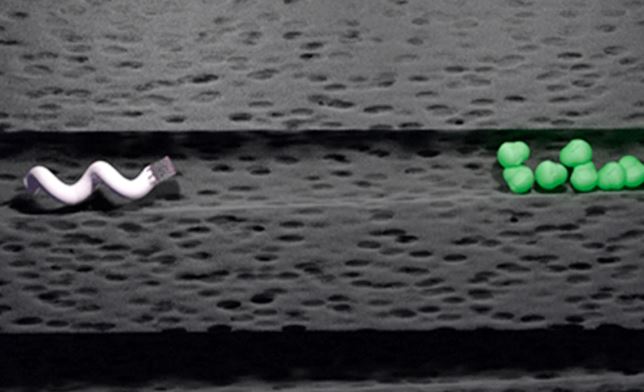 How do Dental Nanobots work in Root Canal Treatment?

Dental Nanobots work by heating up their surface and in turn killing the bacteria in the canals with which they come in contact. So Nanobots use heat to disinfect the canals without the need for chemicals.

According to the findings, nanobots were able to penetrate up to 2000um into dentinal tubules, thus achieving a vast improvement in penetration depth compared to laser activation and ultrasonic devices, researchers believe that using the heat to kill the bacteria is the safe alternative to using harsh chemicals agents or antibiotics to decontaminate a root canal.

When the nanobots were injected into extracted tooth samples, the nanobots are penetrated deep inside the the dentinal tubules under the control of device that generates a low intensity magnetic field. By manipulating magnetic field, the researches were able to cause the surface of nanobots to generate heat to kill the bacteria nearby.

To this end, researchers are currently developing a novel medical device that can be easily placed inside the patient mouth and allow the dentist to inject and manipulate the nanobots inside the teeth during the root canal therapy.

Nanobots Or magnetically controlled nanoparticles have been used to trap and move objects using light, which pass through blood and tend to adhere to cancer cells. Researchers at Theranautilus, have used the dental nanoparticles on mice and have concluded them to be safe for use in Biological tissue.

The study, titled “Mobile nanobots for prevention of root canal treatment failure”, was published online on 28 April 2022 in Advanced Healthcare Materials, ahead of inclusion in an issue.

Learn About Planet DDS, The Company Behind Denticon

Vast majority of US dentists increase pay for dental teams

The 80/20 principle and how it can change your Dentistry